Like many vegetarians in the UK, I’ve taken the pilgrimage to Mildred’s in Soho many a time and experienced their delicious, wholesome food as well as their vibrant, busy restaurant environment which has people queuing out of the door begging for a table.  Part of their success is down to the team in kitchen which includes Australian born Daniel Acevedo.

Daniel started professional cookery in 1997, specialising in Italian, Greek and pan-Asian cuisines, although his Australian, British and Chilean background has contributed to his wide range of culinary tastes.

In 2005 he moved to London and began working at Mildred’s restaurant, where he climbed the ropes quickly taking over as Sous Chef, then as Head Chef.

In October 2010, Daniel and fellow chef SarahWasserman started a food blog for Mildred’s which led them to co-write Mildred’s Vegetarian and Mildred’s Vegan cookbooks.

Their recipes have featured in various publications including: The Sunday Times, The Independent and magazines such as: Red, Good Food, Homes & Gardens, Delicious, Vegan Life and Olive.
Recently, Daniel has been working alongside Ian Meek, Head Chef at The Highfield in Edgbaston, Birmingham helping to create more vegetarian menu choices and co-hosting a special version of The Highfield’s weekly vegetarian/vegan ‘Live Live On The Veg’ event which was a roaring success.

With the festive season soon upon us, Daniel has been working towards the launch of Mildred’s special Christmas menu which is scheduled for the third week of December and which will run alongside their regular a la carte selection.  In addition, he’s also involved with expansion plans for Mildred’s in the new year.

Aside from all this activity, Daniel has kindly taken time out to share some of his favourite culinary items and memories in my Epicurean Mementos interview to give us an insight into his world and his kitchen. 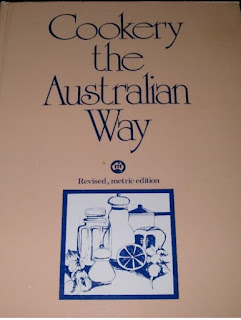 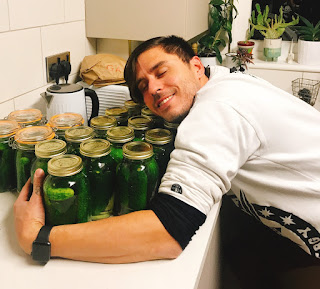 Kilner Jars
I love preserving and pickling and have a nice collection of jars to get me through a large pickling session.  More recently I have really enjoyed pickling Polish style gherkins Ogorki Kiszone.  They are pickled in a salt brine, I do this towards the end of summer, preserving enough to last the winter.  This pickling recipe and method along with a few other Polish classic dishes have been handed down to me by my Polish mother-in-law.  This type of learning, knowledge of recipes and cooking methods handed down by family are so important to me and I feel is invaluable to preserving family tradition and to becoming a great cook.
I remember always hanging around the kitchen at family gatherings when I was young and pestering my Aunties with questions about what they were cooking and how they were doing it, offering to help with any job I could get. 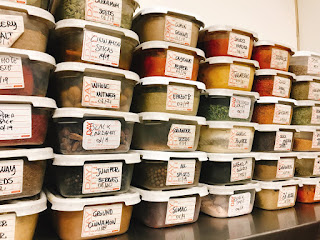 Herbs and Spices
This has to be the best and most exciting part of cooking for me.  The different flavour combinations you can create using fresh and dry herbs and spices is simply amazing.  You can travel the world and create your own experiments with a nicely stocked spice cabinet. 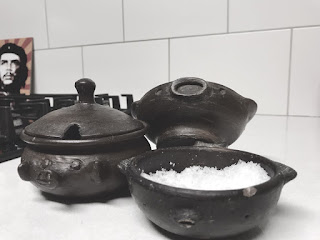 Chilean Clay Pottery
I have various Chilean clay dishes and pots at home, my two essential ones holding sugar and salt.  In addition to storage, the smaller size dishes can be used for serving a pebre (Chilean salsa) or a dip whilst the larger clay pots can be used to bake pies or casseroles.  These dishes are found in every Chilean home and kitchen, I have grown up using and eating from them at every single family gathering (that happened every other weekend) in my hometown of Melbourne.

~~
My thanks to Daniel for his time with regard to compiling this interview.  All photos provided are courtesy of Daniel Acevedo.

Posted by Ukrainian Church Birmingham at 20:21 No comments:

Review: Live Life On The Veg with Daniel Acevedo 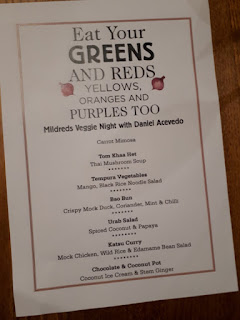 As you will have seen in one of my previous posts,
The Highfield have been working very closely with Daniel to fine tune their vegetarian offerings and to glean some of his knowledge to make The Highfield even more so of a go-to place for veggies.

My Carnivorous Husband (MCH) accompanied me, who seems to be increasing his meat free mealtimes a little more these days I've noticed and with his love for Mildred's as much as mine, he was looking forward to seeing what was on offer.

Our welcome drink came by way of a Carrot Mimosa, a vegetable twist on the classic drink.  An interesting idea and although fine drinks in their own right (carrot juice and prosecco), we didn't enjoy it as much as we had hoped, for us it was a tad too savoury with the fizz.
What I liked about the structure of the evening was that all diners ate together and each course was served at the same time so we all had the same experience in unison.

In almost a celebrity fashion, Ian and Daniel came out of the kitchen, giving us a face to the food and welcomed us to the evening, both very modest and humble when applauded by all.  Before each course, they came out to introduce it and to give us all a little more information and insight into the preparation and ingredients used.

The first cab off the ranks was - Tom Khaa Het - Thai Mushroom Soup.  More of a broth rather than, say, a creamy soup, it contained herbs and diced chestnut mushrooms and enokitake (long, thin, pinhead, white mushrooms).  Hints of ginger came through and it straddled from sweet to sour in flavouring which made it more dimensional.  My portion was made without chilli, as per my request due to my allergy which I was totally grateful for.  MCH had chilli in his and he enjoyed how it dominated the dish but didn't spoil the other flavours coming through.  He's a man who enjoys a little heat.

Tempura Vegetables & Mango, Black Rice Noodle Salad was next.  Having had tempura at other places, I was anticipating a thick, crusty batter on the vegetables, but delightfully not, it was light and sparing so that you could get to the heart of the vegetable, yet still have a coating without each bite ending in thick batter flakes cascading around you.  The dipping sauce to accompany it was delicious, Japanese in style and made up of mirin, rice wine and tamari (a Japanese version of a less salty soy sauce).

Bao Buns, Crispy Mock Duck, Coriander, Mint & Chilli were presented as our third course.  These soft, Asian steamed buns were filled with marinated gluten in soy and garlic with peanuts.  It was one of our favourite dishes of the evening, the marinade was sticky and flavoursome - the power of garlic with the textural crunch of the peanuts and it very much was a case of lick of your lips between each bite.  No easy or graceful way of eating these, hold it with both hands and in Daniel's words - "Get stuck in".

Urab Salad, Spiced Coconut & Papaya was a welcomed palette cleanser of sorts after the Bao Buns.  The salad's Balinese style 'slaw' was broken up by sweet papaya with mint coming through as an aftertaste although neither of us got the taste of coconut.  Very refreshing and spicy (for MCH), I of course didn't have spice, but I still found it very enjoyable.  This is a recipe that has been taken from the new Mildred's Vegan Cookbook.

Katsu Curry, Mock Chicken, Wild Rice & Edamame Bean Salad was our penultimate course and again, probably came in as our joint favourite along with the Bao Buns.  The curry sauce (minus chilli for me) was also garnished with a little watermelon salad and pea shoots offering that contrast.  Placed on top was a small block of soya protein, coated in panko crumbs and a slither of wasabi dressing on top, the wasabi was very mild thankfully.  MCH said it was like eating real chicken, very authentic and I found the whole combination totally moreish. I always worry about curries and how they'll affect me, but I relished it knowing with confidence that I'd be fine.

Dessert came by way of Chocolate and Coconut Pot, Coconut Ice Cream & Stem Ginger.  The dense, chocolate mousse-style was very rich with hints of ginger slashing through it and cooled down with the coconut cream ice cream.  A very nice dessert which made you make a combo on your spoon of chocolate and ice cream for each mouthful.  This is the kind of dessert I tend to always opt for when dining out so it was most welcomed when I saw brought out.
Concluding the evening, Daniel and Ian came out for their final speech genuinely delighted at the response they received from diners.  Daniel came over to see me ("you're the girl with no chillis, right?") to check if the dishes I was served were enjoyable as it was hard to avoid chilli usage in Asian cuisine.  I assured him he did a grand job and that I was grateful for the extra effort that went into my portions.  It was great to get to know him a little more, we spoke about Mildred's (the Polish burger isn't on the menu there any more!!! *Horrified*!), his Chilean heritage and his Polish wife, it was great to see the man behind that little restaurant in Soho.
We walked away feeling very content having had this glorious feast as the focus of our date night and MCH declaring he didn't miss not having meat at all.

Again, I love this journey that The Highfield are embarking on, really taking the time to explore vegetarianism/veganism as the demands for which increase, whilst handling bizarre dietary challenges that people like I throw at them.  Hopefully, they will run a similar night to this again in the future and in the meantime, we have the regular Tuesday night 'Live Life On The Veg' events to keep us going.

~~~
Disclosure:    This post has been written following a complementary invitation to dine from the Life Live On The Veg menu .  This review was conducted honestly without bias and I was not required to produce a positive review.  For further details of my PR policy, please see the Press, PR & Food Writing page of this website.

Posted by Ukrainian Church Birmingham at 20:39 No comments: