Veganuary has become a badge of honour amongst those that are looking for a healthier approach to their eating patterns and for some it has gone hand in hand with the abstaining partner of Dry January.  Quite a big challenge for those that maxed out on gluttony in December and the never-ending feasting opportunities that Christmas brings.


But you can’t ignore the hype when you read the stats in press that:  Waitrose saw a 5 fold increase in vegan searches on their website, that 120,000 people worldwide have signed up for the Veganuary campaign with 52,000 of those being in the UK.


Let’s face it, meat-free doesn’t have to be boring and whilst shops are promoting their vegan friendly wares, there are plenty of dishes that you can make at home that neither skimps on variety or taste.


As such, avid MasterChef UK viewers will recognise Jackie Kearney from 2011 where she became a finalist and this led to her being one of the country’s most recognised vegan chefs.  Having already written award-winning Vegan Street Food, Jackie’s new book My Vegan Travels (published by www.rylandandpeters.com) has brought even more dishes to the vegan forefront and an ideal aid memoir for those that want to partake in Veganuary at home. 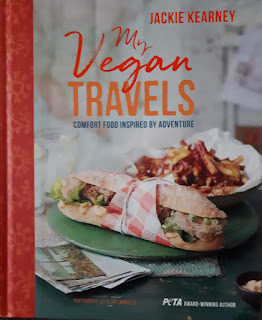 What I like about cookery books now and what is present in My Vegan Travels, is that there is a story associated with each recipe.  Not just ingredients list, method and photo, but there is a tale about where the recipe came from, why it is special to the author, so I find that I get more out of those kinds of books and they are more of a joy to read.


Jackie takes you on a whirlwind trip around the globe with her recipes and shares some of her most exciting travels with you which builds up elements of wanderlust as you turn the pages.  Am I slightly jealous?  A little. To have that freedom to travel must be so liberating.


The book’s wordsmithery is supported by beautiful photography and styling to support the recipes which helps to bring them to life.


As well as the main recipes, the book features ideas for stocks, gravy and basics to get you started as well as alternative suggestions for vegan cheese and milk which feature heavily in mainstream recipes including vegetarian ones so you don’t have miss those things if you decide to take the vegan path.  The one I think most people would appreciate is a replacement for egg which some vegetarians seeks as well as vegans.  Jackie’s recipe using flax/linseeds will solve many an egg issue I’m sure!


My word, there are so many recipes to champion here, but I particularly like:  Macadamia Crumble Pot and Jerusalem Artichokes with Garlic Cream & Hazelnut Crust.


All in all, this is a thoroughly enjoyable book both from a storytelling aspect as well as from a food tutorial viewpoint in a genre that is continually rising in popularity and that will take you way beyond Veganuary.
~~~

Notes:
More information about Jackie Kearney can be sourced via:  www.hungrygecko.com
My Vegan Travels is published by www.rylandandpeters.com


Posted by Ukrainian Church Birmingham at 10:59 No comments: