Chinese communities all over the world are preparing to celebrate Chinese New Year and welcome in the Year of the Horse.
The festivities have been broadly adopted by Western culture with many restaurants holding special banquets and many major cities mark the event by organising public festivals for all to participate in.
I know a Chinese lady who often says she uses Chinese New Year as a ‘fresh start’ if the western 1st of January new year hasn’t started off to her advantage and perhaps there is a little of that that has crept into all our psyches.
I for one love the colourful displays, the playful lion/dragon dance, the chance to wear something red to enhance my prosperity and of course, eat delicious Chinese food.
I am very faithful to my vegetable chow mein option when ordering Chinese food but equally, when I spot it, I love having vegetarian yuk sung and I enjoy creating the little parcels from the hot soy mince and vegetables laced with soy sauce and I love wrapping them up in crisp, cool iceberg lettuce leaves.
Celebrate the Year of the Horse with a feast of your own by trying my vegetarian yuk sung recipe for yourself and here’s hoping for a good year ahead!
Happy New Year!  Or to be exact, "Kung Hei Fat Choy!!" 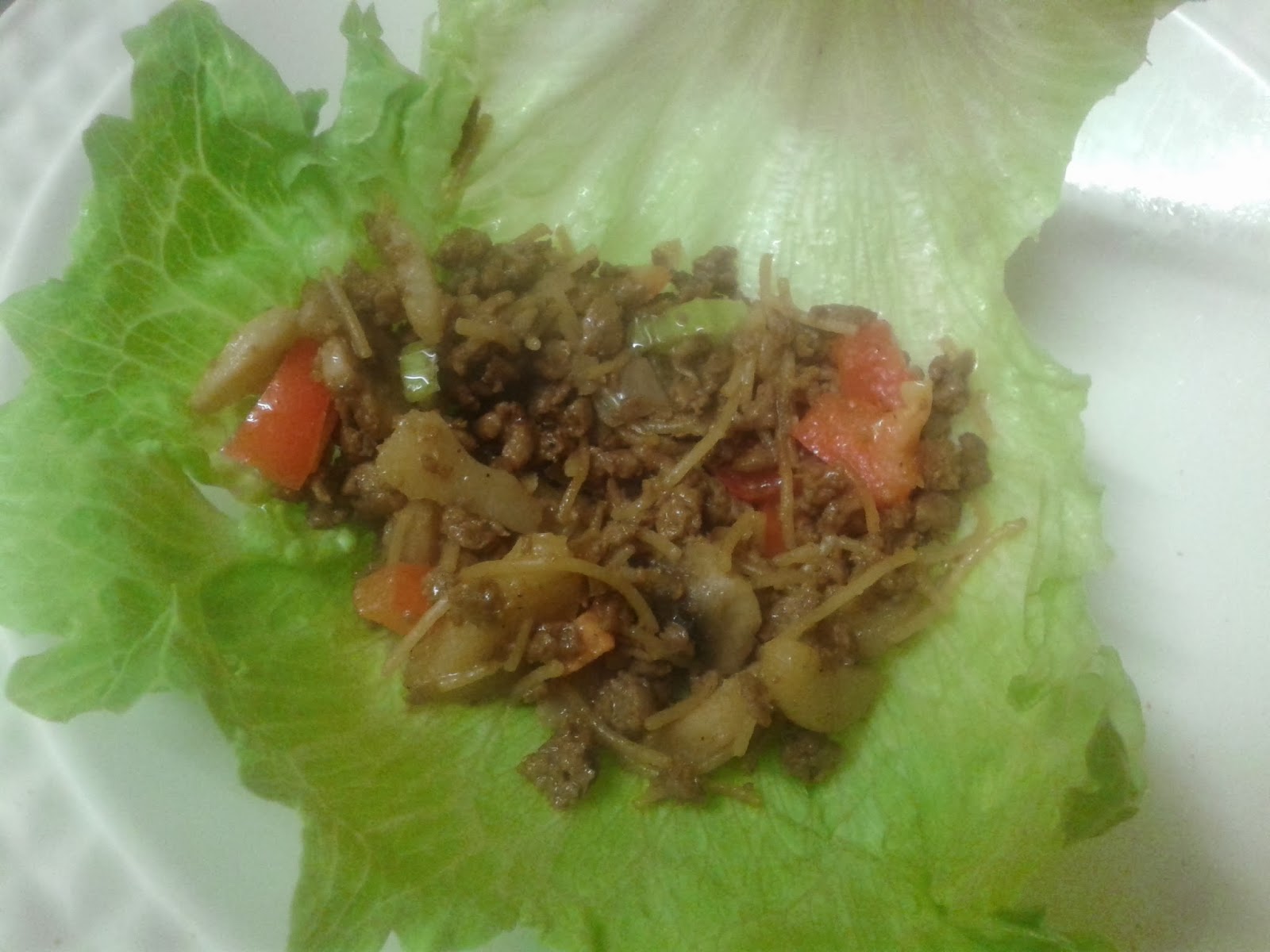 Serves 2-3 as a main course

﻿
Posted by Ukrainian Church Birmingham at 21:18 No comments:


Since the clock clicked over into 2014, I've heard so many people resolve that whilst they may not give up meat completely, they're looking to reduce their meat consumption by, say, a couple of times a week.  Whatever the catalyst for their decision, it means there will be more demand for blogs like mine and veggie cookbooks to provide inspiration.

As such, it is a delight to see that a new book from the World Food Cafe series has been published.  Following the success of their last title - World Food Cafe:  Quick & Easy: Recipes from a Vegetarian Journey, this month sees the launch of  World Food Café Vegetarian Bible: Over 200 Recipes From Around The World  written by Chris & Carolyn Caldicott and published by Frances Lincoln. 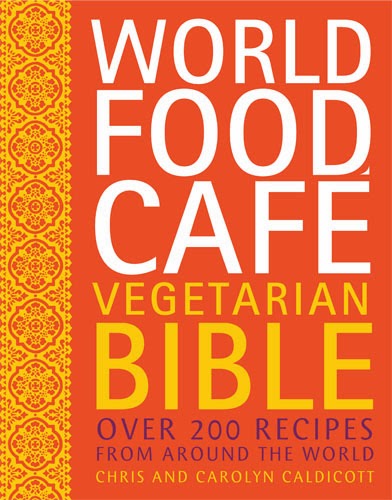 An extension of Recipes from a Vegetarian Journey, this book contains over 200 recipes, 130 of them being vegan, sourced from the authors' globetrotting adventures all tested and ideal to be re-created in home kitchens.

For twenty years, Chris and Carolyn Caldicott's World Food Café in London’s Covent Garden was the hub of new flavours, colours and combinations in vegetarian cooking which when coupled with their world-wide travels, provided the perfect knowledge-base to create their cookbook range.

The Vegetarian Bible accompanies recipes with photography that shows glorious images of vibrant market scenes, vivid bright ingredients and a snapshot of how food is made and celebrated across the globe.   The authors' passion is evident through their written word and their in-depth introduction to each chapter entices you join in their zest for food through their recipes.

The book explores more adventurous climes including the regions of:  The Seychelles, Bolivia, Oman and Laos and the amount of vegetarian recipes that come from each is remarkable.

As with Recipes from a Vegetarian Journey, the book is tailored for more confident cooks who can replicate the dishes as is outlined in the recipes.  Authentic ingredients as listed in the book may be difficult to source but can be improvised upon.

One recipe which caught my eye was Mkomazi Cardamom Mashed Sweet Potato with Pepper Relish.  The authors' stay at Mkomazi Game Reserve in Tanzania saw the camp cook veer from the meat stews he normally prepared to making this veggie alternative.  So intrigued were the other guests, that the camp cook ended up making this for everyone!

I was attracted to this recipe not only because of the use of different vegetables and colour, but because of its twist on a typical vegetable stew.  As I don’t eat red chillis (due to allergy reasons), I omitted this from the red pepper relish yet I found it was still packed with flavour, lifted by the hint of lemon, and was (as the recipe suggested), a great accompaniment.  As a standalone sauce, it would work well with other vegetables or pasta.

All in all, a delightful read both as a travel journal and as a cookbook that would certainly lend itself as a fascinating ‘coffee table’ book  for those moments when you only have 5 minutes for a quick read. 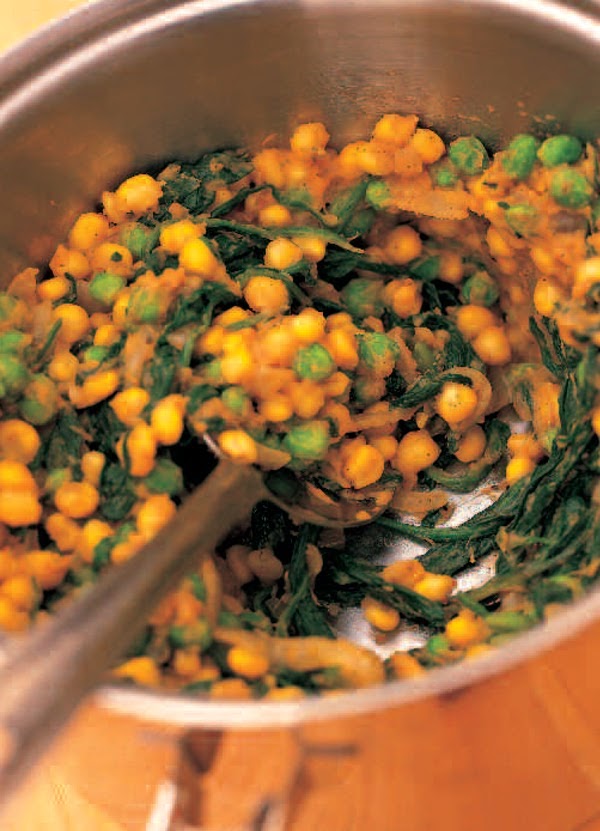 This mash, served here with a zingy relish, would also be good with an onion gravy.

~~~~
Disclosure:  This post was written following kind receipt of a complementary copy of:  World Food Café: Vegetarian Bible by Chris and Carolyn Caldicott.  This review was conducted honestly without bias and I was not required to produce a positive review.  For further details of my PR policy, please see the Press, PR & Food Writing page of this website.

Azerbaijan is a country that few of us know much about and yet straddled across the Eurasian borders, it is seeped with history.  Participation in the Eurovision Song Contest has boosted its profile in recent years with not only strong song entries, but a victory in 2011 which led to the 2012 Contest to be held in the country’s capital Baku.
As well as Baku being the name of Azerbaijan’s capital, it is also the name of top Azerbaijani restaurant in London.  Reading some positive reviews about it, I decided I wanted to go when I was next in the city.  That occasion came when over the Christmas break I made a trip down to the capital.   In the heart of Knightsbridge, near to Harrods on Sloane Street, the restaurant (a former members club), is sign-posted by an easel emblazoned with ‘Baku’ on it by the doorway beckoning you in.  To get one's bearings, a good way to find it is that it's directly opposite the designer boutique Prada.
A warm welcome awaits, with coats taken by the attendant, you are then invited to go upstairs (noting the vintage photos of old Azerbaijan on the walls as you make your way up the staircase), where you enter the grand dining area decorated in pure white.
Booking my table ahead, I took advantage of the special online offer for a free cocktail with their set-menu luncheon (via a restaurant guide website, an offer which is available for a limited period of time).
The set menu was more limiting than the a la carte menu (understandably) but nevertheless, it still gave a full overview of Azerbaijani cuisine and what one could expect.  My interpretation of Azerbaijani cuisine would be a fusion of southern Mediterranean with Turkish-esque and Middle Eastern flavours.  This of course ties-in with the geographical positioning of the country and hence those influences are highly evident in the food offering.
My husband had the meat options and I of course had the vegetarian courses which my review will focus on.
As a starter, I had the  Golden raisin & vine leaf dolma with lime crème fraiche which resembled in principle to that of a Greek stuffed vine leaf dolma.  Wrapped snuggly in vine leaves, the lightly spiced rice and golden raisins were sliced into thick rounds which were served with zesty lime creme fraiche which was delicious to dip the dolma in.
We had some lavash bread to share (similar to Middle Eastern flat breads) which we enjoyed with a sprinkling of sumac – a lemony red spice blend popular in Middle Eastern cooking.  A pot of sumac comes as standard as part of the condiment selection on your table.
For my main, although Wild mushrooms & truffles were listed as the vegetarian option on the set menu, our waiter suggested he could swap that for the Miso grilled aubergine with rocket salad which in honesty, was more preferable.  Served with decorative ginger and a rocket salad, it was endearingly hearty and the miso coating gave the aubergine additional depth.


We shared a side order of Sautéed green beans & asparagus which we dusted with the sumac condiment - (being totally enamoured with sumac, we couldn’t help but use it on everything)!.
For dessert I had Skinny pakhlava with rose water foam and caramelised pistachio which in principle was like Greek baklava but this version came as crusty thin strips of pastry (as opposed to Greek soft filo pastry) with a honey-nut filling, the delicate rose water foam sweetened the dish delicately.
My husband had the Apple tatin with tonka bean & cinnamon ice cream which was just as nice, with the apples softly baked, but was more substantial than the Skinny pakhlava.
Leaving the white havened dining room, we climbed the spiral staircase to the bar area to enjoy our complimentary cocktails.  In complete contrast to the dining area, the bar furniture and sofas are decorated black with coloured  souk style cushions which adorned the seating. A touch of the homeland featured in the stained glass window dressings which echoes Azerbaijani décor.

Our more-ish cocktails were black tea infused vodka with pomegranate &  ginger and then one that was gin based with raspberries.
A unique place with excellent service and a welcomed introduction to Azerbaijani cuisine (although more vegetarian options would be welcomed).  Baku is another example of London’s broad restaurant scene making it ideal for day trippers, weekend breaks, business lunches or just because you want something different.


Posted by Ukrainian Church Birmingham at 21:28 No comments:

As Western Christmas merriment draws to an end in early January, Ukrainian families all over the world will be preparing to celebrate Christmas on 7th January.

A pre-cursor to Christmas Day is the holy supper of Sviata Vecheria on the evening of Christmas Eve (6th January) which is celebrated as more of a focal point of the Christmas period than Christmas Day itself.

Sviata Vecheria consists of 12 meatless dishes (representing the 12 disciples).  Presented on a decorated table which has hay scattered in between seat settings to denote the hay from Jesus’ manger, a bouquet wheatsheaf  nicknamed a ‘dydukh’ which represents one’s ancestors and a candle in the centre of the table which represents the guiding star from the East.

Whilst table decorations and dishes can vary regionally and can even vary between families, the two dishes that remain a constant across Ukrainian households and that bookend the start and end of the feast are Kutia (a wheatberry appetiser) and Uzvar (a fruit compote drink).

Note: This article and recipes have also been published in the Ukrainian Thought newspaper, printed in London for Ukrainians and those of Ukrainian descent in the UK. 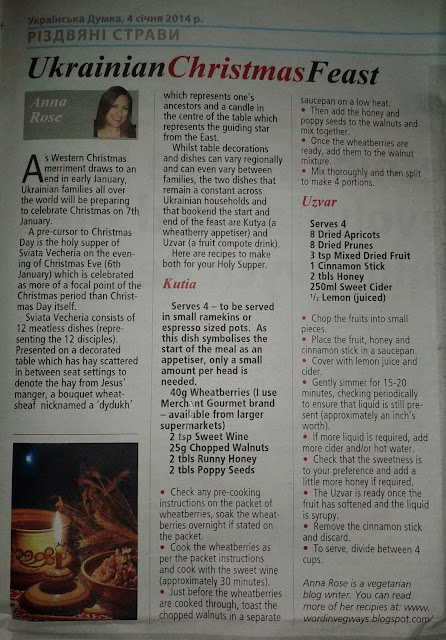 Serves 4 – to be served in small ramekins or espresso sized pots.
As this dish symbolises the start of the meal as an appetiser, only a small amount per head is needed.

·     *  Chop the fruits into small pieces.
*  Place the fruit, honey and cinnamon stick in a saucepan.
*  Cover with lemon juice and cider.
*  Gently simmer for 15-20 minutes, checking periodically to ensure that liquid is still present (approximately an inch’s worth).
*  If more liquid is required, add more cider and/or hot water.
*  Check that the sweetness is to your preference and add a little more honey if required.
*  The Uzvar is ready once the fruit has softened and the liquid is syrupy.
*  Remove the cinnamon stick and discard.
*  To serve, divide between 4 cups.

Posted by Ukrainian Church Birmingham at 19:07 No comments: