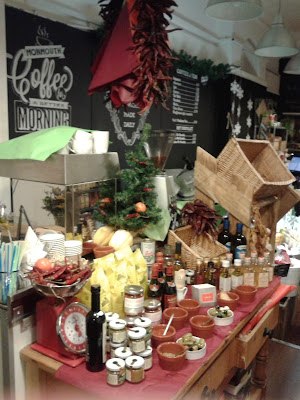 I'm delighted to have been selected as a contributor for the online version of Warwickshire Life magazine. 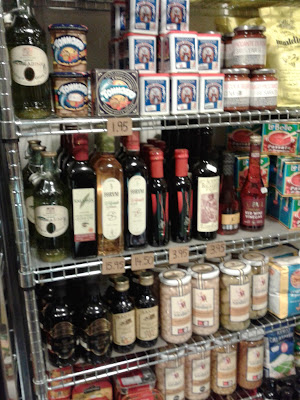 For my first article, I've written about Christmas shopping at delicatessens - veggie style - focusing in particular on one of my favourite delicatessens in the area - Lewis's of Moseley. 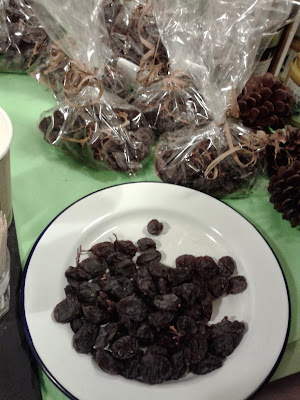 Delis have played a big part in my (food shopping) life and in the article I recall memories of shopping with my Mother buying lots of different things that acknowledged our Eastern European roots and that supplemented our ordinary supermarket purchases. 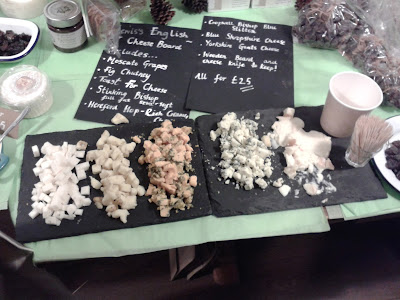 Here's the article link and I hope you get the chance to do some deli shopping of your own before Christmas! 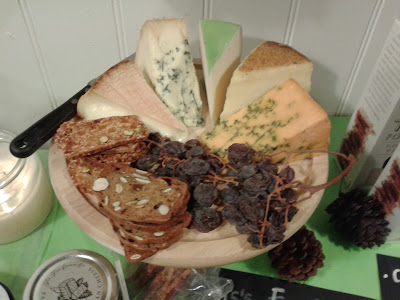 Posted by Ukrainian Church Birmingham at 16:30 No comments: 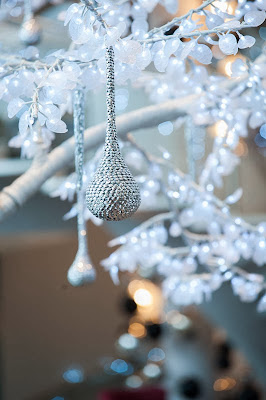 After enjoying a spot of afternoon tea at Hotel La Tour in the summer, I was interested to see that they are serving a Christmas version for the forthcoming festive season.

As well as all the usual goodies including dainty sandwiches, the hotel's signature Welsh rarebit dip with croutons, sweet treats and freshly-baked scones with clotted cream and preserves, there are seasonal variants in the Christmas version to complement the time of year. 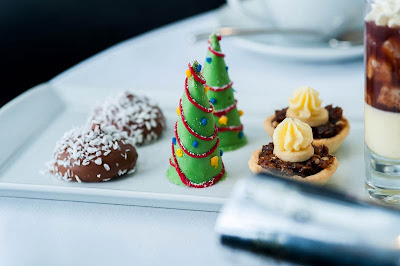 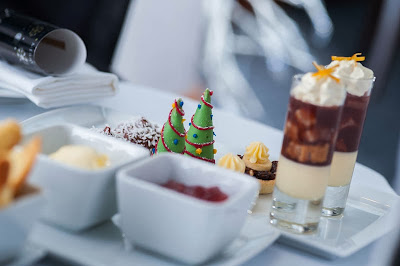 Christmas afternoon tea is served with a selection of teas from Twinings, freshly-brewed coffee or indulgent hot chocolate. Cocktails, including Champagne and Gingerbread egg are available at a supplement.

For strict vegetarians, Hotel La Tour's Pastry Chef Rachel Dorrell can discuss alternative options beforehand to ensure that sandwich fillings and other preferences such as vegetarian marshmallows are accommodated accordingly.

Served each day, with live musical accompaniment on Saturdays and Sundays,  the Christmas edition is available throughout December and priced at £19.95 per person.

Pre-booking is essential and can be done online at www.hotel-latour.co.uk.
Or call 0121 718 8000 to make a booking and/or discuss vegetarian options.
Posted by Ukrainian Church Birmingham at 22:23 No comments:

I roll my eyes when someone assumes that on Christmas day I’ll be eating nut roast.  “Well what else would you eat?” they ask.
I wish to dispel the myth here and now.  As a vegetarian, I don’t automatically have nut roast for Sunday Lunch and certainly not for Christmas Day.  It is instantly thought that nut roast forms the jewel in the crown of most vegetarians’ diets and that isn’t the case and certainly isn’t for me.
Over the years, having shied away from nut roasts in its varying forms and I was curious when approached by Waitrose to make a version of my own.  Following some recent research they conducted, it was bizarrely identified that nut roast came both first and last in a poll of most desired vegetarian main courses for Christmas Day.  This research doesn’t surprise me.
I suppose, being put off by existing versions, I’ve never really felt the desire to venture into creating my own.  But as the festive season approaches and a challenge beckoning, it was time to get roasting those nuts and see if I could be converted.
I love nuts in all their varying types but placed together in one dish can be a little too much and can be quite dry.
But seeking inspiration, I embarked upon taking a look at what recipes are available and I was surprised to see how many people were creating their own interpretations and even celebrity chefs were taking the mantel in making their own versions.  The inclusion of all sorts of ingredients and flavours in the varying recipes almost makes the nuts incidental and secondary.
So following their stance on personalisation I began to thinking about my version and what I’d like to include.  I decided to incorporate my favourite flavours and see if I could weave in a few Christmassy tastes and colours as well.
A nut roast obviously needs nuts.  So I thought about my favourite varieties and opted for cashews, peanuts and pine nuts along with some pumpkin seeds to give it more crunch.  (The very same pumpkin seeds which I dried from my Halloween pumpkin I have to add)!  I then began pondering about other savoury ingredients and decided to include some of my favourite anti-pasti goods which included sun-dried tomatoes, caperberries and artichokes.
Adding a vegetable element to the mix, I opted using grated beetroot for its bulk, sweetness and wintery warmth as well as for its Christmas crimson hue.   Also contributing to the vegetable element were sweetcorn kernels and dried porcini mushrooms (which I pre-soaked/re-hydrated in dry cider) which offer an earthy, appley dimension.

With Christmas denoting a special time of feasting and a free rein on food shopping (well, almost!), special ingredients are granted and I thought it well to reflect this in my nut roast.  Dying for my jar of black truffle carpaccio slices to make its debut, I used a good three slices (chopped) which made for a little indulgence and complemented the mushrooms also used.

In my accompanying ingredient list, I wanted to ensure I had fully covered off the sweet/savoury factors with the nod to Christmas.  So I combined some cranberry sauce, citrusy kumquat flesh as well as the synonymous Christmas spices of paprika, mixed spice and grated nutmeg.
My recipe yields enough mixture to fill 2 standard ramekin pots which make for easy portion sizes if catering for 1-2 vegetarians on Christmas Day or indeed ingredients/cooking times can be multiplied for larger portions.
By taking on the challenge I have actually surprised myself as to how much I have enjoyed re-acquainting myself with nut roast and putting my own hallmarks on it – I have Waitrose to thank for this.  Although I probably won’t make it regularly, I will keep my special recipe especially for Christmas time – after all, that’s what us vegetarians eat at Christmas don’t you know!
~~~

NB: This post and recipe are also featured on the Christmas Dinner page of Waitrose's website under the section entitled 'It's Not All About the Meat...'.  Click this link to see more!
~~~

Serves 1- 2
The majority of ingredients can be purchased from Waitrose.

Disclosure:   This post was created to promote Christmas recipes for Waitrose - in particular Vegetarian Nut Roasts.    I was re-imbursed by Waitrose to cover my expenses to create the meal.  This review was conducted honestly without bias.  For further details of my PR policy, please see the Press, PR & Food Writing page of this website.

Posted by Ukrainian Church Birmingham at 21:17 No comments: 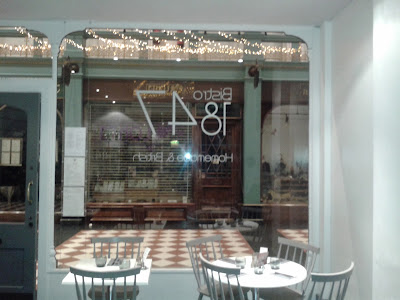 I recently attended the launch evening of Birmingham's newest restaurant Bistro 1847. Based in the city centre's Great Western Arcade, it follows the model of its branches in Manchester and Chorlton. 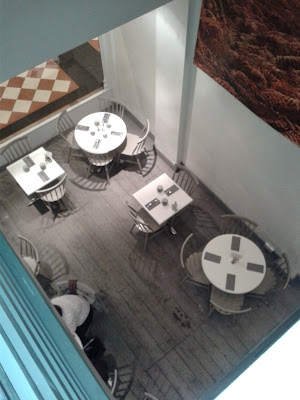 Following the launch, I was invited to enjoy a meal there and try more from their menu with a view to blogging about my experience.

As well as for my blog, I conducted the review for Dine Birmingham.


Dine Birmingham is a fabulous site that showcases the restaurant scene in Birmingham with accompanying reviews.  An ideal reference point if you’re looking to find a restaurant specialising in a particular cuisine or just to see what’s new in the city.  Take a look at the site for details here.

The restaurant steers away from the stereotypical vegetarian image of lentils and beanburgers and provides an amazing myriad of tastes and flavours that would convert even the most staunch of meat-eaters!

To see why the restaurant is packing in the crowds, take a look at my Dine Birmingham review link here.

Sponsored Post:  This post was written following a kind invitation for dinner from Bistro 1847.  This review was conducted with honesty, without bias and I was not required to produce a positive review.  For further details of my PR policy, please see the Press, PR & Food Writing page of this website.

Posted by Ukrainian Church Birmingham at 21:09 No comments: