The Big Feastival took place nearly a fortnight ago (31 August-1 September) and keeping my fingers crossed for good weather ever since I bought my tickets, I was relieved not to have to go armed with waterproofs and wellies!  The sun really did have his hat on that weekend.

Writing about the festival earlier in the summer, I was looking forward to sampling the festival's main offerings which were food and music (two of my favourite things).


Torn between the main stage which boasted some fabulous acts (on the day I was there) - the cheeky The Cuban Brothers, Mark Owen (from Take That), KT Tunstall and The Feeling; and the Electrolux Big Kitchen featuring celebrity demos from Gizzi Erskine and The Chiappa Sisters.  My endeavours to see them all worked.

On the food side of the festival, true to Jamie Oliver's word, there were plenty of eateries and food traders to purchase from.

The retail side was covered by lots of vendors selling artisan goods (oils, chutneys etc) in the small producers area, with some particular favourites of mine including Shepherd's Purse cheese, Oliver's Bakery London (gorgeous loaves), Greedy Goat (goat's milk ice cream) and it was also nice to see my old chums Bluebird Tea Company there too!  Beers, whiskeys and wines were all for the taking and I was of course delighted to see Pimms on draught! 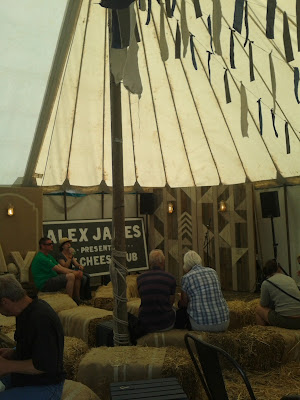 Alex James, as many will know, has now professionally swapped his guitar for a cheese grater and is now a cheesemonger on his farm which of course was the venue for the festival.  Although I didn't get chance to see his demo in the Cheese Hub, but I did sample a number of his 'Alex James Presents...' cheeses which are all vegetarian friendly.  Catchy names such as No.6 Goddess Guernsey and No.2 Farleigh Wallop Goat's Cheese make up his range along with a deliciously creamy blue cheese called 'Blue Monday' which I adored.  I am somewhat an uber fan of blue cheese, especially when melted on toast..... 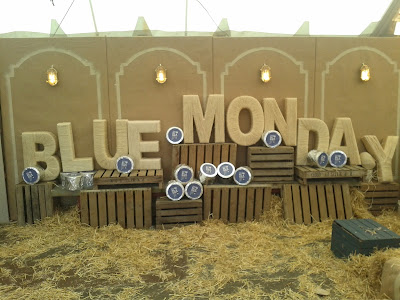 Street Food Alley and Jamie's Pop Up Restaurant area gave everyone an opportunity to grab sustenance in between the music acts and food demos.  So many to choose from but we stopped off to sample one of Adam Henson's Pies.  We enjoyed the Sweet Potato & Goat's Cheese pie which came with a lashing of mushy peas.  Tea-time snacking came via a taste of Beirut from Yalla Yalla who were selling delicious falafel & pitta bread wraps with home-made houmous pots. 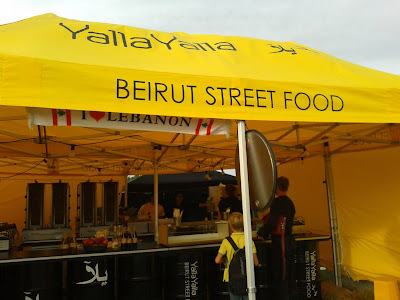 For junior festival revelers, there were plenty of foods suitable for younger palettes and the Tesco tent provided learning workshops about the right kinds of food to eat.

A little bit of star spotting can be embarked upon if you keep your eyes peeled and I met Gennaro Contaldo from Two Greedy Italians and 80's pop legend Tony Hadley from Spandau Ballet who were in the crowd.
This is very much a family-driven festival with something for everyone whether you are a food fan and/or a music fan, there is something for everyone.  A very ambient atmosphere perfect for those that like more relaxed events and ideal for first-time festival goers that want to ease themselves in gently to the festival scene.
I am definitely up for going next year and hope that the sun will be generous to come out again for us.  Until then, I've got some great memories and I have my Blue Monday on Toast to enjoy.....
~~
**Special Offer - tickets for 2014 are available for a short period of time at 2013 prices.  Check The Big Feastival site for details.**


Posted by Ukrainian Church Birmingham at 17:21 No comments:

A friend of mine used to always speak so highly of Yotam Ottolenghi when his vegetarian recipes used to be featured in The Guardian newspaper and as a vegetarian herself as well, she used to share his recipes with me so he’s been on my radar for a while.

Ottolenghi, (as he is better known as), and his recent leap onto Channel 4 exposed him to a brand new audience which followed his culinary adventures in and around North Africa, the Middle East and Southern Mediterranean countries showcasing their different foods and the simplicity behind preparing these flavoursome dishes.
Delving a little more into Ottolenghi’s world, I noted that he has a number of deli-shops in London which I was really keen to explore. So, on a recent trip to London we decided to visit one of his shops and buy ourselves a ready-to-eat picnic.
Just a short walk from the world-famous Harrods department store, down on Motcomb Street, this charming boulevard of contemporary boutique style buildings painted white, is home to many wine bars and salubrious shops and towards the end is Ottolenghi’s Belgravia store.


The red, branded canopy frontage and the window dressed in a layered display of aubergines and lemons beckons you in.  Upon entry, this particular shop is quite bijou only allowing for a handful of people to be in there at any given time, but as most people pop by for quick purchases the turnaround is fast.  However, for those that wish to mooch or that have purchased food they wish to consume onsite, there is small seated area at the rear of the shop.

The focal point of the shop is the deli area where large, tiered platters boast a variety of different dishes which are purchased by weight, so you only pay for the quantity you want.  On the deli counter during our visit were:  Mixed Green Beans & Olives with Roasted Cherry Tomatoes, Orange Zest & Bread Crumbs -  Roasted Butternut Squash with Chilli Coriander and Spicy Mixed herbs and Baby New Potatoes with Wild Garlic & Sorrel.  Of course, I made sure our takeaway box was packed to the brim with a mixture of them all.

As well as deli food, you can purchase freshly baked bread and cakes, meringues and pastries.  I opted for one of the large meringues which was drizzled in raspberry juice. (Which when eaten was chewy, soft and a little crumbly – totally divine).


The shelves are packed with different condiments available to purchase such as chutneys, sauces and jars of sumac and za’atar.

For true Ottolenghi fans, you can purchase signed copies of his cookery books such as Jerusalem (accompanying his TV series as mentioned above) which make for a wonderful gift – one for the Christmas list perhaps?


As our visit and purchases were in preparation for a picnic, the staff at Ottolenghi’s were able to provide disposable wooden cutlery and napkins.
Great food and great weather were the perfect combination for a picnic in nearby Hyde Park.  Our picnic pack was absolutely delicious and his combination of vegetarian flavours were amazing!
I came away feeling totally enchanted with Ottolenghi’s and it was a real treat as a foodie to go in and sample a little of Ottolenghi’s magic.  With shops across London (including Notting Hill, Islington and Belgravia), when in the big smoke you are never too far away from one of his outlets, so pop in and purchase a picnic of your very own.

Posted by Ukrainian Church Birmingham at 21:09 No comments: