Named after the area's former brick and tile trade, Brick Lane in the east end of London is one of those eclectic places seeped with history which has been influenced by years of international immigration.  Now, it is a modern day arty-cum-retail destination often hosting varying markets and festivals.


The other string to its bow is its food.  Its quarter mile stretch plays host to a plethora of cuisine outlets emulating a permanent street food hub, (if you will).

The walk from one end to the other, leads you on a gastro-global journey from Bangladesh, India, Vietnam to Syria and Israel to name a few.

Although not street food per-se, in the sense of a gathering of mobile vendors, but nevertheless a street food community vibe is present in the form of fixed outlets.

The essence is there, where old meets new in a bohemian environment, a statement of multi-cultural London united by food.   Whether that be via hot noodles from one of the many Asian outlets, cream cheese smothered bagels from the ‘Beigel Bake’ or, (in my opinion), the best falafel I've ever had at Syrian cafe Damascus.

So if you're looking for a convenient sit down meal, a snack on the go en-route from Spitalfields or 3am post-clubbing fodder, Brick Lane has something for all palettes and price-points.  Just bring your appetite!

On the subject of Street Food - see my article for 'Cook Vegetarian' magazine (February 2013 edition): 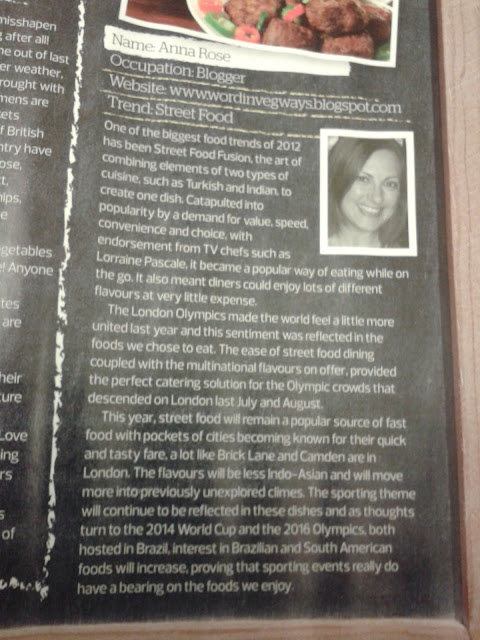 This week, my delicious Aubergine Parmigiana recipe has been featured in the 'Recipe of the Week' section of both the Solihull News and Birmingham News editions.

The perfect dish for these chilly wintery days!  Enjoy!

Posted by Ukrainian Church Birmingham at 20:01 No comments: