I'm a big fan of sandwiches and I always like to create different fillings or use different breads as one can get tired of the standard 2 bread slice and basic filling option.  I thought I'd seen most flat breads in the market place but I came across khobez flat breads recently having not seen them before.  The ones I bought were by Hollyland Bakery http://www.hollylandbakery.com/about_khobez.asp from my local Sainburys store.

My eyes were instantly drawn to the fact that they were labelled as being 'suitable for vegetarians' and contained 'no animal fats'.

Khobez originates from Mediterranean and Arabic speaking countries and is traditionally baked in a tandoor oven.  It is often used to accompany curries or tagines in the same way a naan bread would be used.  But by using it in the same principle as a tortilla, khobez (especially when lightly grilled), makes a great wrap sandwich.

My khobez trial was accompanied by a filling of avocado, watercress leaves, goats cheese and Quorn Chicken-style slices.  So when you're thinking about your next sandwich lunch, consider the khobez as an alternative to the usual 2 slice sarnie. 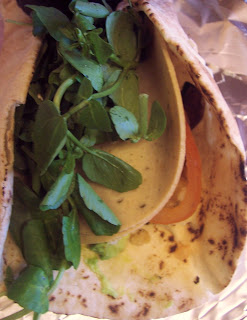 I love food fayres.  Especially ones that focus on local goods, as often there are gourmet delights being produced on your doorstep that you don't know about and food fayres provide the ideal platform for suppliers to showcase them.  This weekend, Hatton Country World near Warwick hosted an Easter Food Fayre with a number of food purveyors from not only the immediate local area but also from neighbouring Midlands towns.  As well as local cider and honey makers, Leominster based Tyrrells Crisps were there with their range of innovative crisp flavours.  I was elated to see that their 'Worcestershire Sauce & Sun Dried Tomato' flavour was veggie friendly as nearly all Worcestershire Sauce products and flavourings are labelled as not.  A really tasty, punchy flavoured crisp, it makes the ideal partner for a sandwich lunch or picnic feast (available in stores nationwide).  http://www.tyrrellscrisps.co.uk/crisps/worcester-sauce-sundried-tomato 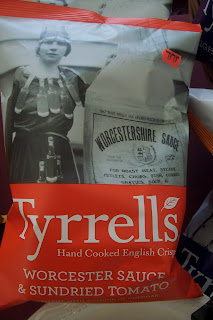 Cotswold drinks company, Bensons Totally Fruity, provided an array of apple juice drinks to sample, many of which were complemented by delicious flavours such as rhubarb or elderflower.  Their country estate farm in Sherborne (between Cheltenham and Witney), also stocks all their apple juice ranges as well as their iced fruit lollies called 'Chilly Billy'.  They make all their juice on-site in Sherborne, from apples harvested only from UK orchards which helps to support the British fruit/agriculture community and following last year's bumper apple crop, it's the ideal time to sample Benson's goods!  Check them out via:  http://www.bensonsapplejuice.co.uk/.

As the spring season blossoms, there will be plenty of food fayres popping up in your area over the coming months - it's a great way to see what you can get outside of the supermarket chains and how you can support local produce and the local economy.
Posted by Ukrainian Church Birmingham at 16:54 3 comments:

Fascinated by the new 'Exotics' section of my local Morrison's store and following my recent successful experimentation with cassava (see my National Pie Week blog post), I decided to try out another item from this rack of delights.  Still feeling tentative in this department, (pick things up, put them down, pick things up, put them down....) I decided this time to go for an Eddoe (Arvi).  Similar in concept to the cassava, it's a root which is used in Asian and Caribbean cookery but unlike the waxy exterior of the cassava, eddoe has a hairy skin (like a coconut).  You mustn't eat it raw, even after peeling.  So after doing some internet research, I decided to boil it whole (skin still on) until the eddoe was tender and soft.  Removing it from the water made it very easy to peel and ready to use.  I guess you can use it as you would any root vegetable (exotic or otherwise) so I decided to slice it, as thin as I would tomato slices, and stir-fry it with other vegetables, sprinkling it with dried herbs and Himalayan Pink Salt for taste.  You can choose any flavouring or spice when cooking eddoe - it's like a potato, a blank canvas you can do anything with. Think of it as a cupcake that you can decorate any which way you like!  So next time you pop to your local supermarket for a pint of milk, swing by the 'Exotics' - after all, if you don't give it a go, you'll never know!
Posted by Ukrainian Church Birmingham at 10:36 No comments:

Word In Veg Ways is now on Facebook!  Take a look and keep up to date with all my veggie news by pressing 'Like' on my page:  https://www.facebook.com/pages/Word-In-Veg-Ways-Vegetarian-Blog/292787974128522
Posted by Ukrainian Church Birmingham at 13:06 1 comment:

If you wish to post a comment on any of the blog posts on here, simply click the 'Comments' link at the bottom of each post, type in your comment and your name (if you'd like to leave it).  Then choose the 'Anonymous' option on the profile drop-down box and your comment will be sent through to me! Thank you!
Posted by Ukrainian Church Birmingham at 22:26 No comments:

In need of something warm and hearty to eat, I cast my mind back to about a year ago when I discovered a recipe for Boxty.

Boxty, (deriving from the old Irish word 'Bacstai'), is an Irish potato pancake, although it has varying recipes across Ireland, all recipes contain fried, finely grated raw potatoes.

Using the standard fried, grated potato recipe base, I cook my Boxty in a 7" frying fan with some vegetable oil.  I pad my version out with a little natural yoghurt in the potato mixture, then add vegetarian bacon, fried onions, mushrooms and red peppers - making it a lot thicker than other versions but that makes it all the more filling, which can only be a good thing.

So whether you're wishing to sample some culinary craic this St Patrick's Day or just in need of some hearty fayre during these chilly mid-March days, boxties are just the ticket.

For recipe ideas, Google 'Boxty Recipes' - remember where recipes suggest using bacon, you should be able to substitute pork bacon for vegetarian bacon.
Posted by Ukrainian Church Birmingham at 22:17 No comments:

I, like most, didn't need asking twice to mark National Pie Week (ending 12 March 2012). The pie has been in existence for centuries in many different guises, with a recipe for chicken pie even being recorded on a tablet c.2000BC in Sumer (modern day Iraq).   My contribution to this celebration of pastry-filled delight, is a little experiment combined with the curiosity of how to cook the Caribbean root 'cassava'.  Cassava can be found in many High Street supermarkets now and is very similar to the Yam.  Usually it is used for desserts although I think it lends itself wonderfully as a savoury ingredient.  It has a dark, waxy bark-type exterior which needs to be peeled away (as you would with a potato) and if there are pink marks, don’t worry, keep peeling until you’re left with a lovely white vegetable (similar shape to a sweet potato).  Then, chop it into small chunks (1cm squares), coat in oil, nutmeg, turmeric and paprika roast them for about 40-60 minutes. In the meantime, using Quorn Chicken-style pieces, fry them in oil, rocket leaves and cherry tomatoes until soft.  Unless you have the gift of making lovely pastry, I would suggest using Jus-Rol puff pastry sheets – already made, already rolled – the perfect short-cut!  Place the Quorn pieces and cassava chunks onto one half of the pastry sheet, cover using the other half of pastry and pinch together (getting that Cornish pasty effect) and brush with milk to get that golden glaze and finally, bake until the crust is a gorgeous bronzed colour!  I made 2 pies, this vegetarian one for me and a chicken meat one for my husband.  As with so many meat recipes, a slight adaptation using Quorn/soya alternatives means you can both enjoy effectively the same meal with little extra effort.   There are a few hours left before National Pie Week draws to a close, so before the clock strikes midnight, I’m off to devour an apple pie – well it would be rude not to........ J
Posted by Ukrainian Church Birmingham at 19:16 2 comments:

Welcome to Word In Veg Ways!

Welcome to Word In Veg Ways!

My name is Anna and having been a vegetarian for the past 22 years, I’ve seen how vegetarian food has moved from being cornered away in health-food shops to a multi-million pound industry with goods available everywhere.

Whilst I don’t eat meat, my husband does.  But we often have the same meal with me using soya alternatives instead of meat which can often mean only having to use one extra pan! Proving, you don’t have to have separate meals all the time.

Being of Slavic descent, being vegetarian has often caused my relatives to be perplexed as to why I voluntarily don’t eat meat when it forms the bulk of their diet, but I have managed to re-create some of my favourite Slavic meals using soya alternatives – although I’m still trying to find a replacement for ‘kielbasa/kovbasa’ (salami-style sausage)!

I’m constantly jotting ideas down, inspired by what I see or read, especially the origins and history of food and dishes, and from this, my blog was born!  So here it is, thoughts, commentary, recipe ideas and if you’d like to get in touch, please do via my email – wordinvegways@hotmail.co.uk.

NB: This blog is purely a fun site to share vegetarian food ideas and is not a forum for political or ethical vegetarian views or issues, neither is it a forum for nutritional advice.  For more information about vegetarianism and vegetarian nutrition, a suggested organisation to contact would be The Vegetarian Society - www.vegsoc.org.
Posted by Ukrainian Church Birmingham at 17:46 2 comments: