Dinner at The Rose & Crown Warwick


The night we visited The Rose & Crown in Warwick, it was the start of the Warwick Folk Festival, so the town and especially this gastropub, were in full swing.

Invited to sample the menu and to check out the pub in general, we picked a great night to visit, a little folk with one’s food is no bad thing. Music to one side, this 17th century inn is now part of the Peach Pubs Group and whilst being very 2015, alongside the en vogue decoration and lighting, the historic beams remain as a nod to the past.

The restaurant area was very busy and Giles (the manager) mentioned it is like this normally anyway without the influence of the festival, so that’s a good sign.

Giles and his team were very passionate and knowledgeable about the pub’s offerings and were able to discuss all the menu items with us in detail.  I’m sure I’m not alone in this, us vegetarians like to ask questions so having knowledge on tap was ideal!


To accompany our drinks of New Zealand Sauvigon Blanc and Lawson Lager from local brewery Purity (indeed we were flying the Warwickshire flag that night), we decided to go for the following menu options:

Choosing our Starters, My Carnivourous Husband (MCH) opted for the vegetarian choice on the Specials Board and I had one from the standard menu and as both starters were veggie, we could try each other’s which I love doing when it happens that way. 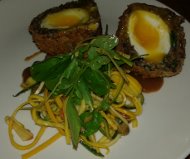 MCH had the Veggie Haggis Scotch Egg, Marinated Courgette Salad, Gooseberry Ketchup (£6.75).  A grainy mock-haggis mixture was tightly packed around a soft boiled egg to create the ‘scotch egg’ effect.  The haggis had a rich texture and was quite filling and the egg was cooked just right.  The gooseberry ketchup, which isn’t often seen, was very tangy and a very good pairing with the haggis/egg.  The portion size was excellent as well. 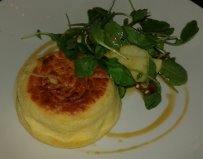 I had the Twice Baked Quickes Cheddar Souffle, Apple & Walnut Salad, Aspall’s Glaze (£6.75).   I’ve never quite mustered up enough courage or patience to try making soufflé at home so it is nice to have the chance to try it when dining out.  Taking a forkful, it was very soft and light (as it should be) upon first taste and then, almost out of nowhere, there was a blast of cheese that came through which was sharp and contrasted really well against the fluffy soufflé base.  Served with walnuts, apple slices and Aspall’s Cider Glaze, to a degree, I thought of it as a ‘posh Ploughman’s lunch’!  I really enjoyed it as did MCH who sampled it too. 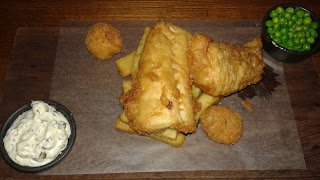 For our Mains, again from the Specials Board, MCH had the Posh Fish & Chips Beer Battered Haddock and Hake, Crab Croquettes, Triple Cooked Chips, Peas and Tartare Sauce (£17.50).  The fish was fresh and the batter was light and hints of beer could be tasted within.  The chips (being triple cooked) were more crispier than they would be normally which he liked.  MCH wasn’t overly keen on the crab croquettes although he felt they would be more eagerly embraced by dedicated seafood lovers.  The tartare sauce was rich, zesty and tangy.
He accompanied his main course with a side order of Green Bean, Fennel & Tomato Salad, Mayes & Green French Dressing (£3.75) which worked well with the fish although the salad was a touch too vinegary when eaten on its own.

As a whole fish dish, he liked the idea and presentation, commenting it was again a good portion size. 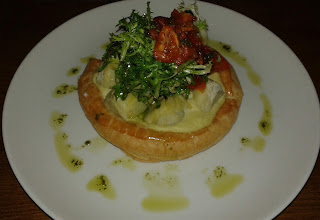 My choice of Main was the Queen Anne’s Artichoke Tart, Chicory & Frissee Salad, Lemon & Caper Dressing (£11.75).
It was a good opportunity to have artichokes which sadly don’t feature as much as they should do on menus.  A good sized portion but perhaps a little too much pastry (for me) for the tart base.  The salad was very crunchy and a nice divergence against the moussey tart filling.   It definitely needs a side order of vegetables and/or potatoes to make it into a more structured main course I felt.  I had a side of New Potatoes with Sea Salt (£3.75) which were lightly buttered and were perfect for the tart.


MCH chose his dessert from the Specials Board (again) and went for the Dip Your Own Strawberries (£6.75).  Similarly to the asparagus theme that ran across the Peach Pubs group in springtime, big, ripe locally grown Staffordshire strawberries were presented in little mock plant pots and a fringe of faux grass dressed the tray.  The pots contained Valrhona melted chocolate and Chantilly Cream, both of which were thick and sat well on each strawberry.  MCH said the dipping element made it a fun dessert to have and ideal if you wanted to end the meal on a sweet note, but not have anything too heavy.

I ordered the Lemon and Polenta Drizzle Cake, Elderflower Sorbet (£5.75).  It was served warm, strong lemon flavours were present and the crumbly crust against the sharpness of the sorbet made for a good combination.  In addition, it was a good palette cleanser and rounded the meal off well.


The Rose & Crown is a quaint, yet contemporary place to dine which equally lends itself well for drinks having a spacious bar area and outside courtyard for that.  Vegetarians have some selection, the veggie specials are really good and I hope the pub continues to think up more good specials in this creative vain.  Also, the staff can adapt dishes upon request to make bespoke meals which is music to a vegetarian’s ears.
With frequently changing specials boards and regular events, it is definitely worth a visit, especially if you are teaming it with a visit to Warwick or nearby Stratford Upon Avon.

~~~
Disclosure:  This post was written following a kind invitation to sample the evening menu at The Rose & Crown Warwick.   This review was conducted honestly without bias and I was not required to produce a positive review.  For further details of my PR policy, please see the Press, PR & Food Writing page of this website.


Posted by Ukrainian Church Birmingham at 21:10